December 2019 Slide of the Month

December’s Slide of the Month is taken from a CIRS poster recently presented at ISPOR Europe 2019. 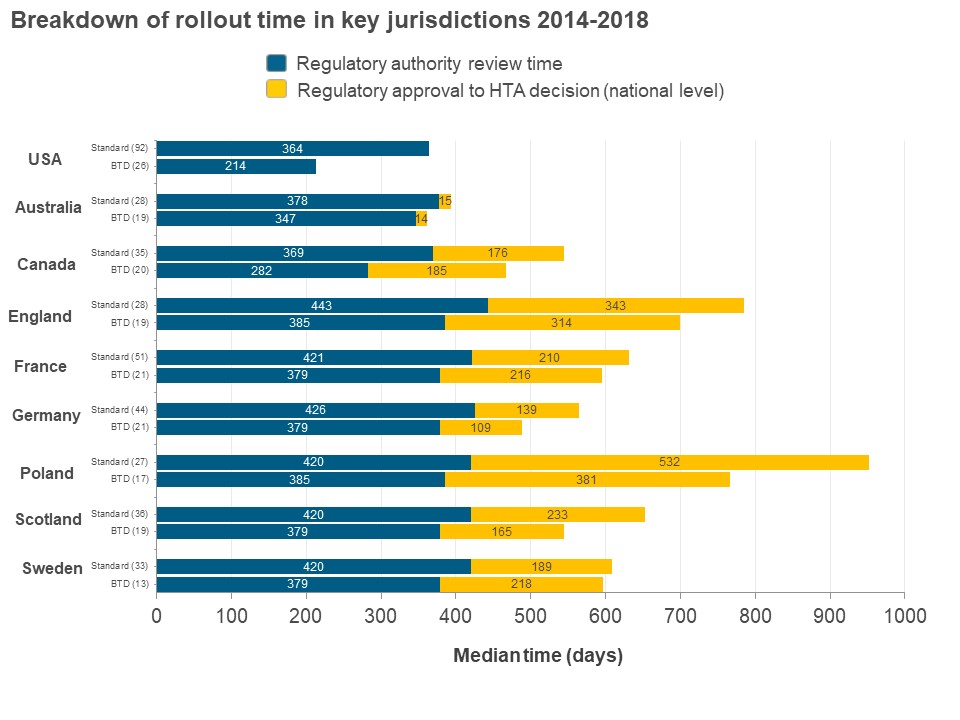 Does FDA Breakthrough Designation affect HTA recommendation in terms of timing and outcome?

In an effort to expedite the approval of drugs treating serious illnesses or addressing unmet medical need, breakthrough therapy designation (BTD) has been used by the FDA. However, the question remains whether BTD translates into faster approval not only in the US but to other regulatory agencies, quicker decision from health technology assessments (HTA) and ultimately global availability of medicines.

Data was collected on New Active Substances (NASs) approved by FDA in 2014-2016 (26 BTD NASs and 92 non-BTD NASs) to evaluate this question. These NASs were then tracked until the end of 2018 in terms of first HTA recommendations in Australia, Canada, France, Germany, Poland, Scotland and Sweden. The data were then evaluated in terms of timing (regulatory date of submission and approval, HTA recommendation date) and HTA recommendation (positive, positive with restrictions, negative and multiple).

In all the countries investigated, NASs with BTD had a faster overall time from regulatory submission to HTA recommendation in each jurisdiction as compared to non-BTD (see figure above). Interestingly, there was little time difference between regulatory approval and HTA recommendation at the jurisdictional level between BTDs and non-BTDs indicating that the reduction in overall time was driven by regulatory approval. HTA recommendations were not affected by BTD status – BTDs do not lead to an increase in proportion of positive/positive with restrictions as compared to non-BTDs except England, which has more than 10% difference and only 1 out of 13 common BTDs had all positive/ positive with restrictions recommendation across the jurisdictions

These results suggest that obtaining a BTD designation does lead to faster approval by other regulatory agencies. However, it does not translate to an increase in positive HTA outcomes. A better alignment between regulatory and HTA decisions could improve patient access to new drugs and presumably better predictability and less uncertainty.